Found this 7" last week in a local antique type junk shop. There was a box of records on the floor that contained the typical crap records you normally find at flea markets and garage sales but in the back of the box was the Blitz - Voice of A Generation Lp. I put the Lp up on the counter and I continued to look around the store to see what else I could unearth when the lady at the counter called me over and said hey I have this little record back here behind the counter. The little records was this Blitz 7". The 7" had a $10 price tag on it, so I asked how much and she said it says $10 but it can't be that much, how about $1.00 each and I said Deal. So there you go 2 Blitz records for $1 a piece...Dave G.

Ludichrist - CBGB "Off The Board" Cassette 1986 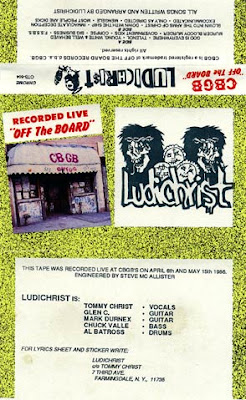 Found this one in the tape box the other day and figured I'd throw it up on the blog. The sound quality is good and the music is pretty good too. I honestly haven't listened to Ludichrist in over 20 years, but when I played this sucker yesterday the songs came right back to me..."Hey waiter there's a God in my soup" . 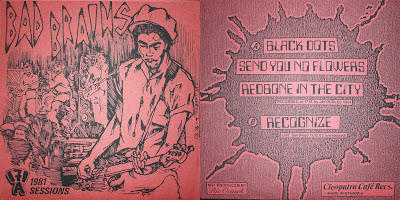 New fanclub issue of four previously unreleased Bad Brains tracks. According to the liner notes, three of these songs (Black Dots/Send You No Flowers/God Save The Queen ..um I mean Redbone In The City) were recorded for a compilation that was never released, circa '81-82.The B-side song is an unreleased reggae jam. The liner notes claim these songs were taken from the original masters and 500 of these things were printed...Dave G. 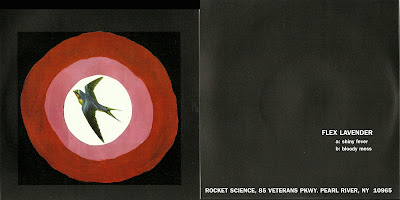 Here's a nice little 7" that I released on Rocket Science Records back in the early - mid 90's. This is not metal, punk, emo or hardcore, but it is in my opinion a very good indie rock record that deserves to be heard. The band includes Dave Lerner who was in the band Native Nod who some of you maybe familiar with from the 90's emo scene. Flex Lavender had a female singer and definite Helium feel to their music. This 7" was recorded by my friend Alap at his Sweetwood Sound Studios in NJ. Some of you may know Alap from the band Dalek, and he has also contributed some remixes to the hydrahead label etc. Anyway I think Alap did a great job with this recording as it really has a clean sparkling production which really suits the music. I am also including 2 bonus tracks from the Flex Lavender demo tape which I am sure have not been released in any form until now, actually I am posting the complete demo and not the 7". The first 2 songs on the demo are the songs on the 7" ...I hope someone out there gives this a listen and enjoys it. I have copies of the vinyl available still if anyone is interested in getting one...Dave G.