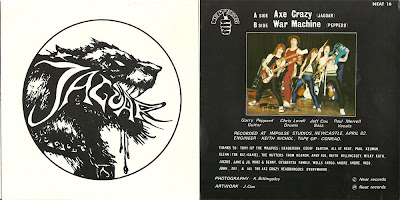 
Since I posted Goldsmith and Soldier up I figured I would dig this classic 7" out of the archives to finish off my little NWOBHM run.

The A side of this record contains a nice uptempo rocker and the b-side steals the show for me with a nice ballad type rocker reminiscent of Iron Maiden's Remember Tomorrow or something along those lines...Dave G. 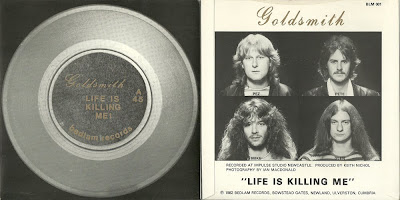 Life Is Killing Me
Music Man


Here is another NWOBHM 7" that my metal hating friend gave me last week.

Pretty cool obscure record that's worth sharing and worth a listen if you like this kind of
thing...Dave G. 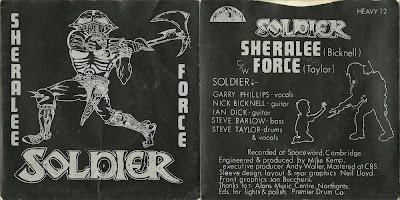 
I bought some records from a metal hating friend last week and luckily for me this 7" was one of the gems he had no use for.

Soldier deliver sold NWOBHM on this 7" with the up tempo A side Sherilee being the standout track for me with its sold riffing and catchy vocals. The B-side is more mid tempo but still a good solid rocker with some nice guitar soloing running into the fade out. If you are a fan of early 80's NWOBHM then you really can't go wrong with this 7"...Dave G.

The mighty Mothman formed in the nether regions of NJ somewhere around 1993, and used to play a lot of shows locally with a lot of the Emo bands of the mid 90's, though there was absolutely nothing Emo about Mothman.

Mothman actually played more of a dirty Lower East side of NYC style of Metal more similiar to Prong or the Unsane. The music is heavy, dark,angry and hits like a repetitive pounding to your head.

If you like what you hear....I released a Mothman 7" back aound 1995 or so that you can purchase from me right here in the distro section of this blog.

Mothman is actually still active today, however they went through a change in drummers some years back and changed their name to The Nolan Gate. You can download The Nolan Gate elsewhere on this blog or you can buy a copy of their cds from my distro as well or don't buy anything...I really don't care...Dave G.

Fresh Meat - The Stunning Self Destruction 2011 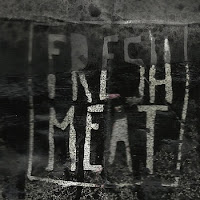 Fresh Meat have a brutal hardcore punk style that is sort of horror inducing. This is a good promising recording for a band that has been together for less than 6 months. The music reminds me of the Misfits meets Ministry or something along those lines. I think the band is onto something here as their music has a fairly original feel to it to my ears. Anyway Give them a listen and keep an eye out for future releases...Dave G.

"Fresh Meat started in May of 2011 and within three weeks started gigging. With influences spanning punk, hardcore, psychobilly and also electronic music we opted to use programmed drums instead of a live drummer. This gives the music a cardiac inducing pounding rhythm which will either make you dance or vomit down your favourite Exploited t-shirt." 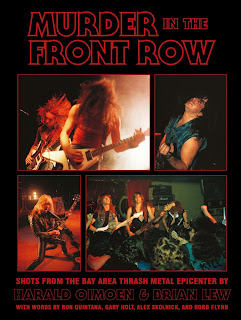 During the early 1980s, when heavy metal was defined by MTV and mile-high hair, San Francisco’s small community of dedicated headbangers scorned image and instead

risked life and limb in search of the ultimate in musical thrills. Locals Exodus and Los Angeles transplants Metallica reigned in small clubs like the Old Waldorf, The Stone, and the infamous East Bay bastion of heaviness, Ruthie’s Inn. Thrash metal upstarts Slayer and Megadeth found a second home in the Bay Area, while a homegrown breed of tempo-crazed teenagers like Legacy, Possessed, Death Angel, Heathen, and Vio-lence brought Bay Area thrash metal to critical mass.

Photographers Harald Oimoen and Brian Lew were dodging bodies from the very start, in front of the stage, backstage, and on the stage itself. They captured the public victories and private parties of a scene where fans and musical idols were equally hellbent on faster, heavier music and endless outrageous fun. Oimoen and Lew fought on the frontline of a war for individuality, snapping frame by frame as thrash metal was born, along with stagediving, crowd-walking, and countless other magical moments filled with key local personalities.

Somewhere along the way, Oimoen and Lew’s friends in Metallica, Slayer, and Megadeth became legends. Today, the Big Four thrash metal bands pictured in this book are the reigning elder statesmen of heavy metal. Their fellow ragers in Exodus, D.R.I., Testament, Death Angel, Possessed, and Forbidden remain ambassadors of a Bay Area metal scene that continues to thrive and command fascination around the world.

“This will not be a history book, but rather a time machine back to the ‘bonded by blood’ days of the original Bay Area Metal scene. Before they played the Bay Area, Slayer wore makeup onstage—after that first Bay Area show they never wore makeup again. This book will show people why.”—Brian Lew 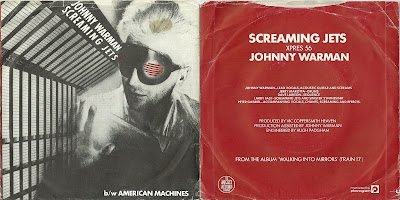 Cool early 80's bizzaro punk / new wave single with Peter Gabriel on accompanying vocals, chants, screaming and effects. The music has a bit of a Bowie or Gabriel feel to it as well. I felt like posting something a little off the beaten path today...hope you enjoy...Dave G. 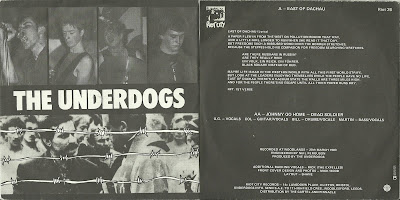 The Underdogs from Leeds In Yorkshire England released this excellent slab of Brit street punk in 1983 on Riot City Records. Overall this is excellent rough and tumble Brit punk with good memorable melodies thrown in. From what I can tell this 7" is The Underdogs only solo vinyl release, though they did appear on a few compilations and they also released a few cassette demos as well...Dave G. 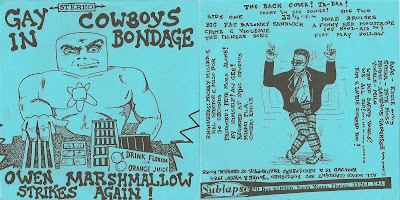 Fort Lauderdale Florida' Gay Cowboy's In Bondage released this filthy little ditty in 1984 on Sublapse records out of Miami Fl. What you get is fairly simple straight up punk/hardcore done with enough snotty humor to make this record an enjoyable listen.

I see that there is a discography out there on Burrito Records so if you like this 7" you should try to track down the discography as well...Dave G. 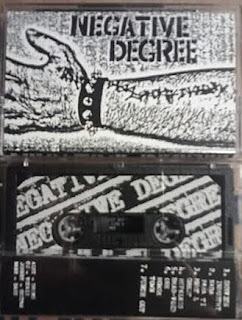 Excellent Straight forward angry punk / hardcore with a bit of a Germs feel in the stripped down guitar sound. Also, brings more current bands like the Formaldehyde Junkies to mind.

Honestly, not much more to be said about this demo, it's just a solid all around demo that should definitely lead to a 7" release in the near future.

Looks like distro's are selling out of this tape pretty quickly so I would get one fast if you like what you hear...Dave G.

Here's a couple songs for you to check out.