This tape showed up in my inbox today and I could not be more happy. Honestly it made my day. Since I have pretty much zero time for this blog at the moment I passed the files over to Erich at Good Bad Music For bad, Bad Times blog. So if you want this go on over and grab it from Good Bad Music..Dave G.

I used to really like this demo back in the day. I also had an Lp by Atrophy that I sold years ago. I can't remember the name of the album and I am too fucking lazy to look it up at the moment, but it was their first Lp. I think it had a joker and missiles on the cover or some shit. Anyway, this demo is okay. Beginning of track 2 sounds like SOD and the rest is solid thrash/power metal...Dave G...tired and out.

Pretty cool bootleg release containing 46 demo and rehearsal tracks by the NYHC legends Agnostic Front. The sound quality overall is good, except for the occasionally out of tune guitars lol. The rehearsal tracks are a fun listen with the between song banter etc. These recordings are also available on the AF demos cd that Grand Theft Audio released back in 1995,however the Grand Theft Audio cd itself has over 60 songs on it, and I do not think the cd is in print at this point...Dave G. 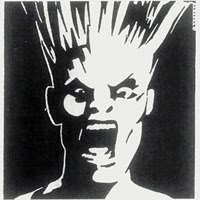 A friend reached out to me today and asked if I had any Screamers recordings I could send her. I figured since I ripped this demo to send to her that I might as well put it up on the blog as well.

The Screamers were one of the original LA punk bands, however the Screamers were very different from the other bands of the era as their music was keyboard not guitar based. This is pretty over the top yet brilliant music for the most part. Unfortunately, the band never released any official records back in the day and we only have demos and live recordings floating around today...Dave G.