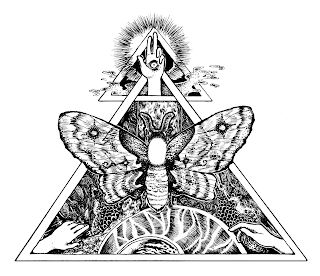 Having personally released a Mothman record in 1996 I have to say that I was caught off guard when this EP submission hit my inbox a few days ago. I mean, had my good friends from Mothman who now play in The Nolan Gate really get back together and record music behind my back without letting me in on the secret? Well as it turns out my pals were not playing an elaborate trick on me at all, what actually happened is some young upstarts chose a band name without doing a simple Google search to see if said name had been used before.

Anyway, I'm old and I don't give a shit what these guys call themselves, but I do care that after listening to their music I couldn't think of  a single useful thing to say about what I had just heard, so I put the Bandcamp link up on my Facebook page and asked my friends to give me there thoughts about the "new" Mothman...and here we go.

SP says "they're no Orchestral Movements in the Dark"

PA says "No other band that calls themselves Mothman will ever be as good as NJ 20th century Mothman.The odds are unfavorable".

So there you have it. I actually side with PA on this one, but listen for yourself and you be the judge...Dave G.

Mothman 2013 can be heard Here