I posted Cold Steel's "Dead By Dawn" demo a while back and I think I like the demo a little more than the "Perfect Peace" cassette in all honesty, though "Perfect Peace" has it's moments the music seems a bit more commercial and gimmicky to me in places. I still hear the Anthrax,Testament, Metallica, Flotsam and Jetsam influence at least to my ears, but the Anthrax type choruses are a bit much for me at times...Dave G. 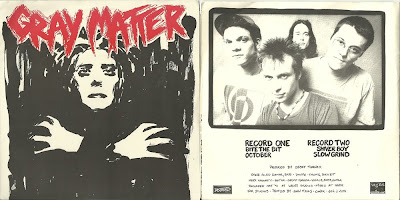 I fell in love with the opening song " Bite The Bit" on this double 7" the first time I heard it back in 1991. I'm not sure this 7" still holds up for me beyond the opening track but it's still worth posting. In my opinion Gray Matter's best record is "Take It Back" from 1986, so if you like this 7" I would recommend you give "Take It Back" a listen if you haven't heard it already...Dave G. 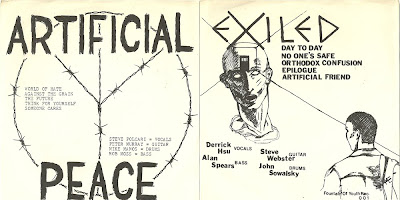 Artificial Peace and Exiled sound very similiar to me on this split 7". Both bands play a mix of mid tempo and fast paced hardcore punk with pretty poor recording quality in all honesty. This 7" definitely has a certain charm, however I think I prefer the Artificial Peace songs on the Flex Your Head compilation and also on the recently released Artificial Peace discography.

I am posting this up as a reminder to everyone to purchase a copy of the official AP discography from Dischord so please go order yourself a copy...Dave G. 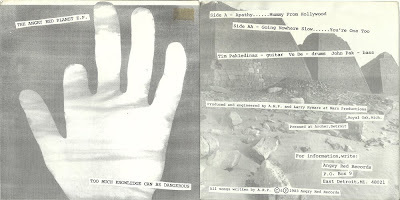 Angry Red Planet "Too Much Knowledge Can Be Dangerous" is one great trashy yet melodic punk hardcore record from Detriot Michigan. Angry Red Planet also released another 7" Gawkers Paradise (Touch & Go, 1985) and an Lp called Little Pigs Little Pigs (Angry Red Records, 1987) , both of which come with my highest recommendation. There is also a second full length Lp from 1989 called Give Em' Enough Dope...Dave G.
Posted by Dave G at 4:02 PM 0 comments 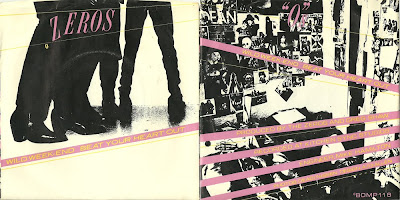 Wild Weekend
Beat Your Heart Out

This is the second Zeros 7" from 1978 and it is a classic slab of KBD punk rock. The a-side is a fast catchy punk rock song and the b-side is a more mid-tempo Ramones style song that will get caught in your head for the rest of the day once you hear it.

Bomp records has a few Zeros Lp's available through their mailorder so please order some records or cd's from Bomp. A good Zeros compilation to start with is "Don't Push Me Around" which collects the Zeros early singles,demos and unreleased songs...Dave G.
Posted by Dave G at 9:00 AM 2 comments 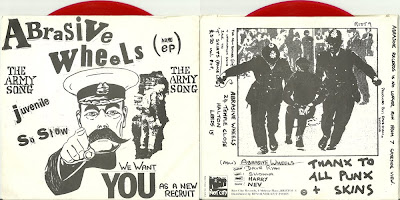 This is the third single from Leeds UK's Abrasive Wheels, released in 1982 on Riot City Records. What you get is good solid rough and tumble street punk with plenty of sing-a-long vocals. Probably one of the best singles to come out of the early UK punk scene, so give it a listen if you've somehow never heard this one before.

Billy Bragg and Patrik Fitzgerald are both urban folk singers or acoustic punks if you will. I prefer urban folk singers personally. Both Bragg and Fitzpatrick started performing during the late 70's early 80's British punk movement, and both artists wrote acoustic punk/folk songs dealing with working class issues. Anyway, I thought it would be a good idea to post these records up today to show a little different side of the punk rock and roll genre.

Up first is Patrik Fizgerald's first 7" from 1977 "Safety-Pin Stuck In My Heart" , which is probably his most well known song. Fitzgerald went on to release a total of eight 7 inches and 2 Lp's in the punk rock heyday between 1977-1982. If you like what you hear then check out his complete discography Here and start tracking down the rest of his musical catalog. 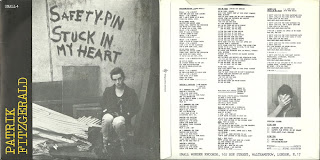 Up next, I am presenting the "Between The Wars" 7" by Billy Bragg. Bragg is definitely the more well known and accomplished of these two artists, and the 4 songs on this 7" from 1984 are some of his finest works in my opinion...enjoy! ... Dave G. 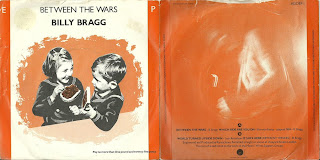 Billy Bragg - Between The Wars 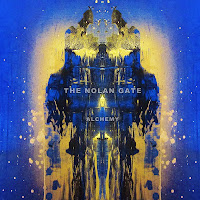 
One of New Jersey's longest running metal monsters has awakened from a 4 year slumber to unleash it's newest album "Alchemy" on the unsuspecting masses.

The Nolan Gate sticks to what they do best on this 7 song album which means you get big angry choruses, heavy rumbling bass, pounding drums and wave after wave of pummeling riffs to keep your head banging.

The Nolan Gate has been pounding it out on the Jersey club scene for 10+ years and they definitely deserve to be heard so please purchase a download of "Alchemy" for a measly $2.00 to show The Nolan Gate some love...Dave G. 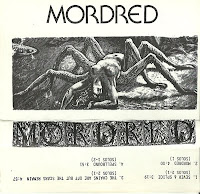 A commenter mentioned Mordred on my previous Mercenary post so I figured I would dig out Mordred's first Demo Tape and throw it up on the blog.

I don't have much to say about Mordred honestly. I remember Mordred moving in a more funk metal direction after the release of this demo tape, however the music on this demo is good straight up Thrash metal...Dave G. 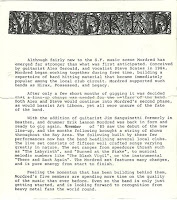 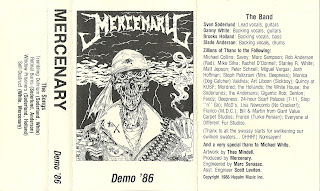 Here's a demo tape I mail ordered directly from the band back in 1986 and never received.I remember reading an incredible review of this demo in some fanzine back in 86 so I was literally dying to hear the tape for myself,therefore you can image my incredible disappointment when the tape never arrived and the band ignored my follow up letters asking when they were going to send my tape etc. Keep in mind this was pre-internet and email so I couldn't just type in Mercenary demo tape mediafire and download the music so when the tape never arrived I was literally deprived of their music for many many years to come until I finally bought a copy of the demo off ebay sometime back.

Since over 10 years or so had gone by from the time I ordered the tape and then finally actually heard it the music had less of an impact on me than it would have if I had received the tape back in 86 when I was 19 years old, however the demo is still really good and holds up well today. To my ears I think this demo sounds similar to The Legacy demo tape... who morphed into Testament.

Oh well, I guess this post gave me a chance to vent a little hahaha...I feel better now...Dave G. 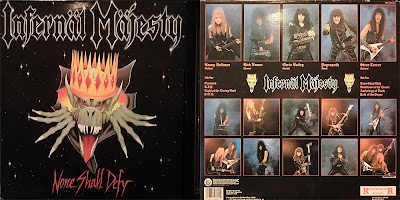 A straight up Canadian underground thrash metal classic. If these guys had a better name, better album cover and didn't look like complete poseurs then maybe this record would have been huge haha...but hey it's the music that really matters and this record kills from start to finish with technical riffing, ripping solos and time changes galore...this slab of wax contains everything you could possibly want from a thrash record so check it out...Dave G. 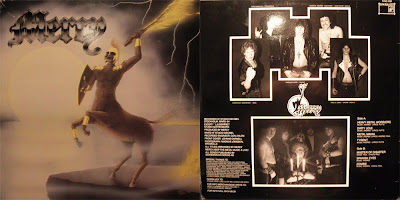 Excellent early 80's metal Lp from Sweden's Mercy. This album features Eddy Markulin on vocals who most of you metal heads know as Messiah Marcolin of Candlemas fame.

The music is really excellent NWOBHM with hints of doom and moments that are reminiscent of Mercyful Fate...without really sounding like MF.

A highly recommended listen...glad I was able find this copy recently hiding out in a local record stores used bins...Dave G.