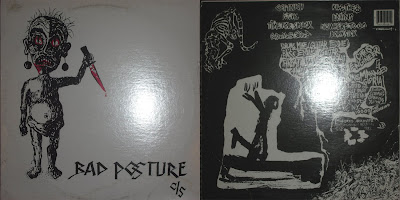 God damn this is some dirty nasty shit right here. Essential San Francisco punk rock from 1983. I got this Lp from my friend Chris a few years back, and I thought he might miss this one a little...so here you go Chris. 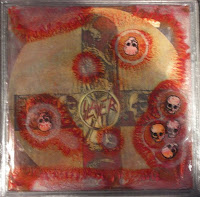 Wow an alternate version of a song where I can actually hear a fucking difference between the original and the alt version. I actually hear a little haunting keyboard in the back ground on the alt version of Seasons In The Abyss which is pretty cool, though the OG version is still better. They also tacked on Aggressive Perfector for the 800th time Slayer used that track as a b-side. Much like the Violence Vomit Bag I remember when the liquid in the jacket used to actually be liquid, unfortunately it turned into a dried blood stain over the years...Dave G. 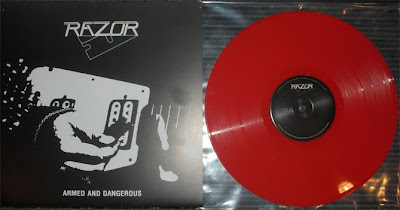 Yeah you can get this on other blogs, but I don't care. I guess this is a bootleg of a bootleg or something. Anyway, red vinyl is cool, and the music is great and you can get one for yourself at www.nowayrecords.com . Now go take some money out of your paypal account and order one of these before they go away. 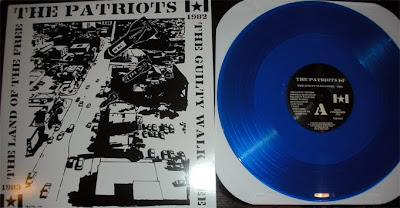 This record just showed up in the mail today and I can't wait to get into it. This Lp contains the original 1982 demo recordings plus the classic 1983 7" "Land of The Free" and a track off a Mystic Records compilation Lp from 1983. Anyway, The Patriots rule and this is an official release not some shitty bootleg so I am not going to give it away for free, but I do however suggest you head over to www.punkrecords.com and grab one of these bad boys from Jason before they are gone..Dave G.
Posted by Dave G at 12:40 PM 2 comments 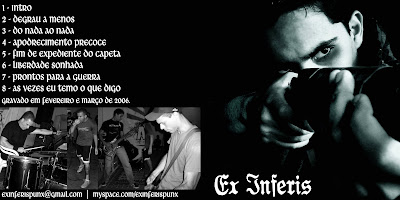 This demo showed up a week or so ago in my inbox and I finally got around to giving it a listen today. So basically what we have here is my first unsolicited demo review. Ex Inferis hail from Brazil and play a style of metal that mixes a nice dose of fast straight ahead metal with some nice thick riffing and also has one foot simultaneously in hardcore. I like that they mix up the vocals a bit between a screaming sort of power violence type vocal with a deeper death metal vocal at times. I have to say I do not expect much from demo submissions, but I think this one is definitely worth your time and attention if this is your type of music, so give them a listen for yourself and feel free to comment to let the band know how you feel.

P.S. If anyone out there wants their demo reviewed feel free to send it my way, however if I like your music enough to review it then expect me to ask you to send me a free physical copy of your recording because I am a record collecting nerd after all. So Ex Inferis where is my demo lol...Dave G. 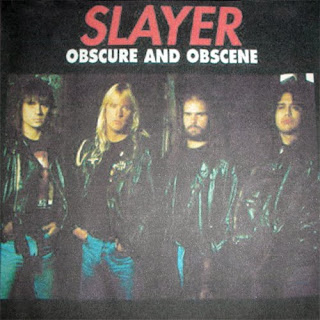 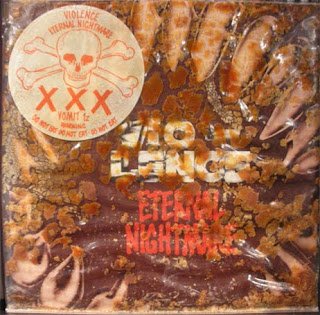 Ah the vomit bag...I remember when I bought this the vomit was all watery and it would slosh around inside the sleeve like well...VOMIT hahaha. It's funny to me that there is a warning on this thing stating " Do Not Eat". I know I am a metalhead but did they really think I was stupid enough to cut this thing open and eat it's contents ? Anyway, I posted this one just for the fun of it, and I fully expected to hate the music at 42 years old, but I'll be damned if I didn't do a little head banging to this one today....Dave G. 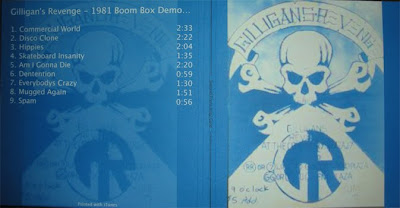 Here's a little something I got my hands on recently that I had been looking for for what felt life forever.

Gilligan's Revenge is pre Token Entry and is much more punk than hardcore which is a good thing in this case. The recording could be better and the sound seems to switch from the left speaker to the right speaker at times but the recording is definitely listenable and enjoyable, and these songs are the only living record of the band that is still in existence. Here is a bit of history about Gilligan's Revenge and Token Entry that was provided by Johnny Stig himself.

"Here is a little history on GR and the demo. I'm going off the top of my head... Let’s see. First let me say I played bass on the demo and also played bass for Token Entry on The Ready or not 7" "Beneath" and Jaybird albums.
Yes, the demo was recorded on a boom box in my garage. Dave Gunner from Kraut let us use his box. The reason it switches between the speakers is because the singer sang directly into the built in mic and he kept accidentally clicking a button. The drums consisted of a kick, snair, hihat and a crash. I had a borrowed bass amp (I borrowed so many) that was definitely transported to the garage on a skateboard. A tiny little Marshall and of course a boombox. It was recorded in 1981. I,Johnny played (bass) 15, Ernie(drums) 14, John (vox) 14 and Andy (guitar)14. Ernie and I started GR and recruited John and Andy. We went thru a few singers after John. Eddie Sutton from Leeway, John Woods then Anthony (TE, Raw Deal, Killing Time, Token Entry). A few guitarists too. After Andy (Devil Dogs) we got Mick(Token Entry) then Dito (Major Conflict) for like 2 weeks. Then Eddie Rossi a 16 year old guitar prodigy. Then Mick again. Then into TE. I'm sorry to say that is the only demo that can be found. We had others and also recorded an album which was never released with the "prodigy" but those tapes are gone. We probably had about 40 songs over the years. Some even followed us into Token Entry. Psycho, Latent Images and Antidote. I think Look Around and some others too. Ernie made the GB logo and the GR logo. GB started in 1987 GR was in 1981 so maybe he just forgot. We were well into Token Entry already. Plus let me also say GR was the first skate punk band in NYC and we were the youngest ever NYHC band along with the Young and the Useless who were about the same age. There you go"