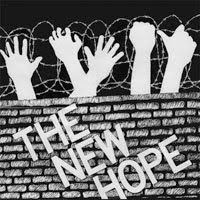 This incredible compilation of Cleveland Ohio area punk /hardcore bands was originally released in 1983 on New Hope Records. I have to thank Smog Veil for re-releasing this monster and adding an entire albums worth of bonus tracks that were not included on the original 1983 release.

Honestly, what blows my mind about this compilation is that every damn song on this record kills. I dare you to listen to the sample songs I am providing by The Guns, Positive Violence,Zero Defex, Off Beats, agitated ( so goddamn good) and The Dark and then tell me you didn't have to run straight over to Smog Veil to get a copy of this Lp . As if the 30 songs on the original 1983 version of this record weren't enough, the reissued 2x Lp adds 30 more bonus songs and it comes with a download that includes an additional 20 songs....so you get a total of 80 !!! songs if you purchase the double vinyl.

Also, for more details about this album and to read even more praise just check out Erichs post on Good Bad Music For Bad, Bad Times...Dave G 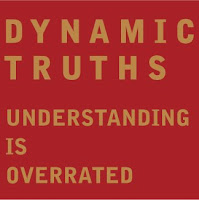 Here's a cd that I actually released last year on Little Black Cloud records which was a label I was involved in with 2 other friends until things went south between us. The label itself is still active, however I am no longer a part of the label.

Anyway, the Dynamic Truths were an active band in the mid 90's who released one 7" on Merge Records back around 1998 (which I was a big fan of) and then disbanded. As luck would have it one of my labelmates just happened to be friends with Bob Schick (vocalist Dynamic Truths, Honor Role, Coral etc) so we decided to ask Bob if he had any unreleased material that we might be able to release as an unreleased album. So to make a long story short we ended up with almost 30 unreleased songs which we whittled done to the 15 songs that are part of this cd collection.

I am going to give you a couple sample tracks to check out and if you want a copy of this cd then I have a few copies available though the Label/distro page on this blog or you can order a cd directly from the Little Black Cloud website that I am no longer affiliated with...Dave G

P.S. If you like vinyl you can get this album on vinyl from Little Black Cloud. I never got copies of the vinyl so please do not ask me if I have copies available.

Uh Huh
Sailors Of The Highway
Posted by Dave G at 2:15 PM 2 comments 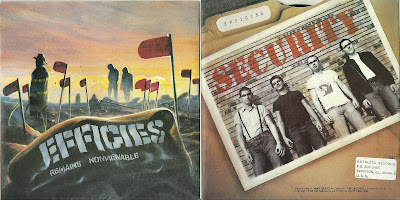 Effigies - Chicago, Il
Effigies - Remains Non-viewable Lp contains both of the songs from this 7". Purchase the full CD here

Everyone is probably familiar with the Effigies at this point so I don't know what to say about this one honestly. The A-side is a nice rocking punk song and the b-side is a bit of a long locked in rhythmic more post punk sounding song...great band...buy their records.

Body Bag Security
Posted by Dave G at 10:19 AM 2 comments 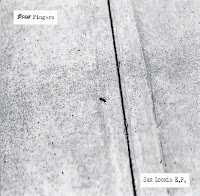 
Well here you have it, my first compilation post derived exclusively from demo and record submissions.

Up first is a self released 7" by "Four Fingers" who I had previously been unaware of though we live in roughly the same neighborhood. I would say that Four Fingers music fits in well with the music I normally post on the Rocket Science blog ( straight up punk/hardcore with good vocals and a combination of gang style and sing along choruses) . The band told me the newer material they are working on sounds like Infest meets Embrace which sounds like a cool idea to me....I look forward to hearing more from Four Fingers in the future.

The rest of the music submissions are all over the map honestly, everything from tough guy hardcore "Proof" to interesting Brasilian electronic type music from "Madame Rrose Sélavy". I also received something from a noisey band called "Teeth Nasher" with a simple note that said "I hope you hate music because I sure do" which makes sense when you hear the racket they have created.

Anyway, if you are feeling adventurous then check out these bands and feel free to comment etc.

Keep the demo and music submissions coming. You can email me at dave88@optonline.net to submit your music...Dave G.
Posted by Dave G at 8:53 AM 1 comments

From The Valley Within - A San Jose Compilation 1983 - Lost Records 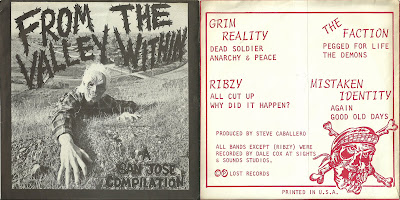 Good compilation of San Jose punk bands from the early 80's. . I own this record because The Faction is on it, and I'm a fairly big Faction fan, however the other bands on this 7" are pretty good as well except for Grim Reality in my opinion.

Anyway, Grim Reality kicks this comp off with 2 slow songs that are just okay for me. Ribzy is up next with 2 rough and rockin' songs with vocals that bring Darby Crash to mind. The B-side kicks off with my boys The Faction and then finishes with Mistaken Identity who kick out 2 decent uptempo jams. I think the major problem for me with this 7" is that they kicked it off with my least favorite band, I bet if Grim Reality was the last band on the comp and not the first that this record would have a better overall feel for me...Dave G. 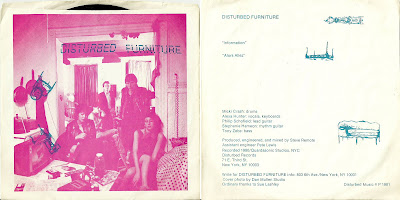 Here's a cool quirky little post punkish 7" I found in my mystery 7" box. The mystery 7" box is a box of about one hundred 7" records that I got from a friend when I bought his collection. The box is full of interesting KBD, synth and power pop type stuff that I am not really sure what to make of and it's pretty overwhelming to work my way through. I have actually been pulling good records out of there by chance for about 4 or 5 years now lol. Anyway, My friend Tim was rummaging through the mystery box last week when he pulled this one out by chance and said "hey let's give this one a listen, it looks interesting" , and to our surprise we discovered that it was good, or at least we think it is...Dave G. 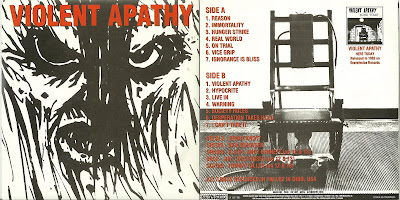 Wow the demo tracks on this 7" are excellent full speed ahead hardcore punk bearing very little resemblance to the bands 1 and only 7" that I posted a few months back. I like the the slow methodical pace of the 7", however I definitely prefer the speed and power being displayed on these demo recordings.

Bootleg 7" with the following track listing: Tracks 1-11 recorded November, 1981 in East Lansing, MI (not OH as noted on back of 7" sleeve) . Tracks 12 and 13 are from the Master Tape vol. II LP and track 14 is from Process of Elimination EP. 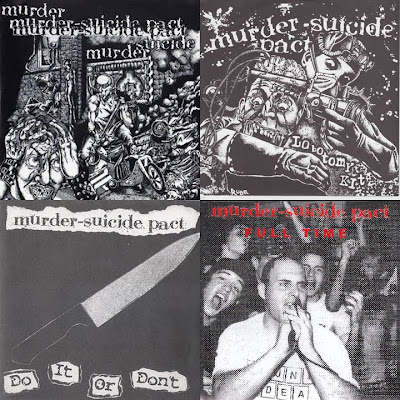 Murder-Suicide Pact formed in October of 1997 by ex-members of Failure Face, Slap of Reality, E.B.S. and End Of The Century Party. The band released a full length Lp (cd) in 1998 and then followed that up with a 7" called "Lobotomy Kit" . MSP continued to tour up until 2005 when the band finally called it quits, however in 2008 they reformed to play a reunion gig which lead to a UK tour and the band deciding to keep it together permanently once again. Since 2008 the band has released a demo and two 7 inches, and they continue to tour to this day.

Murder-Suicide Pact play a style of hardcore that is full of thick heavy riffs and gruff vocals with an overall sound that is similar to Failure Face, but maybe a bit thicker and heavier in the overall delivery of the songs . Also, I definitely hear a little Black Flag in the mix as well. Overall, the songs have a heavy / violent/angry feel to them, but they still manage to contain enough melody and catchy riffs to keep things interesting. Give these sample tracks a listen and if you like what you hear then hit some links and support the band...Dave G.

If you have any problems listening to the tracks above then you can download a zip of the songs Here
Posted by Dave G at 3:17 PM 1 comments 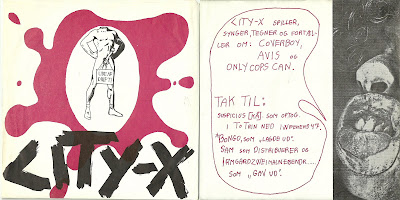 I first heard this amazing single back in 09 over on the Good Bad Music For Bad, Bad Times blog. Well, after almost 2 years of searching I finally have found a vinyl copy of my very own.
Erich had said about this record that "The first side is perfect and second side sucks" and I totally agree with him in all honesty. The b-side has some strange Reggae Clash thing going on, but the A-side is definitely pure punk rock gold...Dave G.
Posted by Dave G at 5:23 PM 6 comments 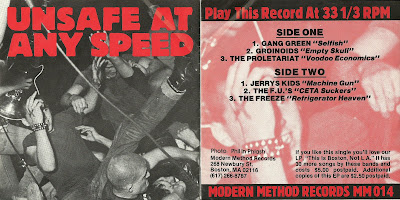 Companion 7" to the This Is Boston Not L.A. compilation Lp featuring the same bands as the compilation Lp, and the music is just as essential. Every band delivers on this 7"... a must for the old school hardcore punk lovers...Dave G. 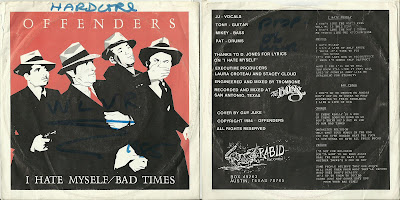 I think Al Flipside nailed the review of this record back in 1984 so I think I will just share his review with you and leave my description out of the mix.

"I Hate Myself" is a wild musical barrage that never lets up, the guitar constantly screams at you. A real good single song. "Bad Times" however has a long dragging intro before it starts to cook but never really turns into food, good lyrics tho."
-Al Flipside, from Flipside #43, 1984

I Hate Myself Bad Times
Posted by Dave G at 1:05 PM 2 comments