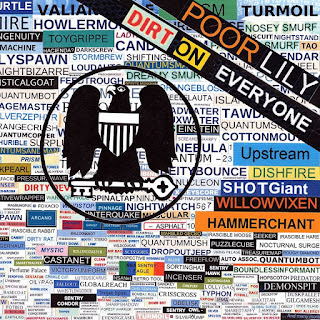 Poor Lily first caught my attention a few years back with their Lp Vuxola which was a whirling dervish of what sounded to me like the Minutemen and Dead Kennedy's getting together for a heavy jam session. On "Dirt On Everyone" , Poor Lily keep that same intensity going but to my ears they sound even heavier and meaner, and I like it.

This album is a barn burner right from the get go. The opening track We Are opens calmly before exploding into the frantic fray of the next track up Nsaman. From this point on the album moves along  quickly with an occasional let up here and their to allow the listener to catch their breath.

Poor Lily really put together a strong Lp from beginning to end and they deserve to be heard, so head over to their webpage and hear this great album for yourself. Actually, better yet, drop some $ on a digital download or the vinyl, you will not be disappointed...Dave G.