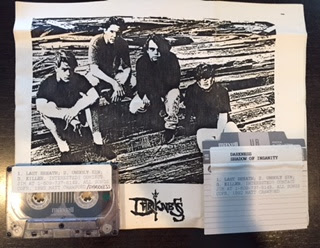 Here's a tape that I picked up at the flea market this past weekend. I found a listing for Darkness on Encyclopedia Metallum but it incorrectly notes that they are from New York and it contains pretty much no information about the band. The band actually hailed from New Jersey.

This demo is very well produced. The bass is thick and heavy and the riffs are solid. I think they may have a bit of  a Metallica or early Meshuggah thing going on.  Anyway, not bad for a fairly obscure band whose tape I found at a flea market 25 years after it was released...Dave G.

Email ThisBlogThis!Share to TwitterShare to FacebookShare to Pinterest
Labels: Darkness Shadow of Insanity