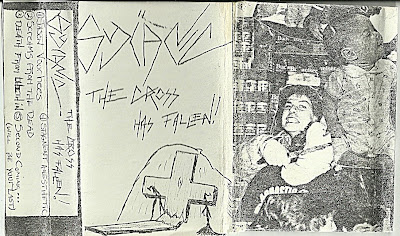 Here's a demo tape from my youth that was actually made by some friends of mine and my brothers back in the day. Syianic hailed from Rockland County NY and they released this demo in 1987 and a second demo in 1988 that consisted of only 1 song, but what a killer song it is, more on that later. Anyway, the band feature Glenn (guitars), Rodney( drums) and Damon (bass and vocals) who later went on to play with Non-Fiction with Dan Lorenzo of Hades.

Well, that's enough background let's get to the music. The first 1987 demo is complex underground Death/Thrash metal with tons of good riffs, pounding drums and walking bass lines. In 1988 the band went back into the studio looking to improve on the sound quality of the 87 demo and also to take the music to an even more complex place, and what they ended up with is an epic VoiVoid meets Slayer "Hell Awaits" era sounding masterpiece of a song...Dave G.

The 87 demo has some great songs on it. I just wish the sound quality was a tad bit better. Don't get me wrong it's still listen-able, it just makes you wonder what the songs could've sounded like if they had proper production. I think this band was ahead of their time. You can hear some influences in the music but still, they were doing some interesting shit for 1987.

The demo is a testament of its time and I love to see things like this come to light after 20 something years.

The At War With Self song is great too. Really good prog metal if I can describe it that way. Reminds me at times of the later Death albums (Sound of Perseverance) where they wound throw in technical jazz type parts but at the same time this comes across as a lot more experimental and different, in a good way. It all fits together really, really well. Great riffs too.

Yeah, I remember even back in the day wishing the sound quality was a little better on the 87 demo but in hindsight the recording quality adds a little bit of charm to the overall package if you know what I mean. Authentic underground metal 20 + years ago had a certain character that is sadly missing from most of the cookie cutter produced album of today.

So glad this post happened....and Syianic has finally seen the light of day! What a great bunch of guys, and seriously.....absolutely stunning live! We played about 5 to 6 shows with them in their short career, and they were SO good...it was downright unnerving. Sure the quality of the demo is bad, but so what, so is every other underground demo from the 80's......that's what it was all about! I know this is quite a cliche line I am about to use...but these guys should have been HUGE! Great post Dave!

agreed, in hindsight it does add nostalgic charm as a lot of demos from back in the day had similar sound. Takes me back in time for sure!

Thanks guys!!! Those SOR/Syianic shows were intense indeed...good times! Much respect and appreciation for taking the time to post and the kind words. Now all we need is a re-union show!